Client Log-in Mobile: 07779 657 983 Free-Phone: 0800 77 101 74 Email: info@sgdj.co.uk
Book Event
I first spoke to Sue in November, and booked the party. They got married on 14th February 1984, so this was their 30th anniversary. I asked if they had a first dance on the day, and they didn’t. So- 30 years later at their party, they did!
Background music consisted of a mix of tunes from the 60’s- 80’s, and their advance requested songs included music from The Kinks, The Beatles, Bob Marley, Madness and Simply Red. After the buffet, they did their first dance to “Twist and Shout” by The Beatles. All guests’ requests were played, and there was some epic dancing. Barry and Sue chose to end the night with some slow romantic songs- the last of which was “Wonderful Tonight” by Eric Clapton. 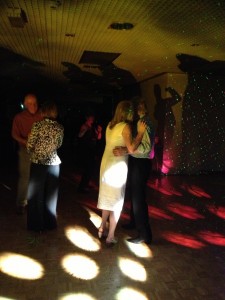 Barry asked everyone for a round of applause for me, June, the DJ at the end of the night, as everyone had enjoyed themselves. Thank you, Barry.
What a lovely couple!
Have you got any questions? ... Please get in touch!